One of the clinic’s most recent and substantial victories was on behalf of Lehigh County veteran Allen Blose, who applied many years ago for benefits from the U.S. Department of Veterans Affairs stemming from his service as a “volunteer” for chemical warfare testing. Blose was injected with four different toxins, including the nerve agent VX. Just a few drops of VX rubbed on the face of a North Korean in an airport incident in 2017 was fatal.

From 1965 to 1975, the Army, CIA, and VA conducted chemical warfare testing at the Army’s Edgewood Arsenal facility located in the Aberdeen Proving Ground in Maryland. The government exposed young soldiers in the military to toxins to test the short-term effects without regard to the long-term health consequences, treating them like human guinea pigs. Blose was 24 years old when he was exposed to the nerve agent.

Clinic students worked closely on Blose’s case with Tom Applebach, director of Lehigh County’s Office of Veterans Affairs. His expertise and close relationship with the VA’s Regional Office, combined with the students’ scientific knowledge and work with an expert, helped Blose to receive a 100-percent disability rating with back pay for 23 years.

Third-year Penn State Law student Tiffany Kernen worked on Blose’s claim for over a year. The payoff for her in terms of experience was as huge as her client’s victory. Kernen interviewed the client multiple times, attended a hearing with him, and examined many VA decisions looking for errors to appeal, and she was the first person to notice VX was given to Blose. The VA had ignored the damaging effects of VX, which caused a series of medical issues for the veteran.

Kernen had help from 3Ls Ashley Clasen and Kyle Russell who gathered scientific evidence from a successful class action filed by Edgewood victims against the government. Clasen and Kernen asked Jack Vanden Heuvel, professor of molecular toxicology at Penn State, for help with understanding the scientific evidence and medical expert testimony. The clinic then hired its own expert, Dr. Robert S. Brown Jr., using donations from other veterans. Brown showed the connection between the VX injection and Blose’s ocular toxoplasmosis, a parasitic eye infection, and other conditions. Brown found that the VX produced immunosuppression and central nervous system damage.

Kernen used her clinic experience to intern at the Board of Veterans Appeals last summer, while Russell helped his father, a Vietnam veteran, to file his own claim and win. The younger Russell said he “would have never known about this option” without his participation in the clinic and Penn State Law Professor Michele Vollmer’s Veterans Benefits Law class.

Third-year student Katherine McNally took lessons from Blose’s appeal and helped a second Edgewood victim this semester. McNally said that “working in the clinic with Professor Vollmer was a very rewarding and insightful experience. I was given numerous opportunities to develop client interaction skills by observing multiple interviews, conducting a few of my own interviews, and emailing and calling clients throughout the semester. The best part of my clinic experience was working directly with clients and listening to the veterans talk about their military service and their life after service.”

The clinic has its closest relationship with Centre County Director Brian Querry. The two offices collaborate on many claims. Their first collaboration in 2015 was for former Penn State Professor of Counseling Psychology Bob Slaney, who commanded a Pathfinder detachment in Vietnam, was exposed to Agent Orange, and was diagnosed with Acute Myeloid Leukemia (AML). The clinic students first won service-connection and later won a 100-percent disability rating.

Using Querry’s expertise with the VA’s new Rapid Appeals Modernization Program (RAMP) and the clinic’s scientific and medical knowledge about AML, the students were able to win service connection and 100-percent disability ratings in the same decision on a faster track for two more Vietnam veterans with AML this semester. Veterans with 100-percent disability collect over $3,000 in monthly benefits.

Recent graduate Adrian Rogers said his work on an AML appeal “was one of the greatest experiences of my three years at Penn State Law. I was able to witness firsthand the hard work and commitment it takes to support your clients wholeheartedly.” 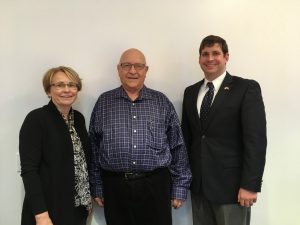 AML client Dr. Ronald Mehok from Pittsburgh spent his service in Vietnam in the operating room saving soldiers. He did not expect to see a favorable decision from the VA in his lifetime. He wrote to Penn State Law Dean Hari M. Osofsky to praise the clinic students and their quick victory. He also thanked clinic volunteer attorney Leah Davis, who connected Mehok with the clinic. She knew Mehok and his family from her work for the Pennsylvania Commonwealth Court of Pennsylvania.

Third-year student Bethany Ashworth, a first lieutenant in the U.S. Marine Corps and future military judge advocate general officer, wants the VA to make AML a presumptive disease connected to Agent Orange exposure. She got the idea from AML client Slaney and his wife, Jill Morgan. Morgan, a psychologist with a Ph.D. from Duke University, provided the clinic with her own research on several other leukemias that were on the Agent Orange presumptive list and questioned why AML was not.

Adding to Morgan’s research, Ashworth, Clasen, Kernen, and recent Penn State Law graduate Casey College spent many hours studying the scientific reasons why other diseases were presumptive for Agent Orange exposure. Ashworth, with assistance from College and Vollmer, wrote a law review article to advocate for AML to be added to the VA’s presumptive list, which the clinic hopes to publish in spring 2019.

Ashworth argues in the article that because the VA added AML to a presumptive list for Camp Lejeune victims, it should add AML to the Agent Orange list. Camp Lejeune victims drank water on base that was contaminated with benzene and other toxins. Benzene is also a harmful toxin in Agent Orange. When making AML presumptive for Camp Lejeune, the VA relied on a report from the Agency for Toxic Substances and Disease Registry (ATSDR). In contrast, when declining to make AML presumptive, the VA relied on a report by the National Academy of Sciences. The clinic’s law review article argues that the studies examined by the ATSDR were broader and better able to address the scientific question and the article will highlight the need for more coordination within the rulemaking arm of the VA.

Veterans Clinic students do not just master client interviewing, document review, or medical and legislative history research. They also hone their appellate advocacy skills. Third-year student Thorsten Swider and recent graduate Matthew Selmasska made amici oral arguments—one for the prosecution and one for the defense—before the U.S. Air Force Criminal Court of Appeals last spring. Both advocates led teams of other clinic students, including 3L James Hutchison and L.L.M. graduate Ekakshra Mahajan, who wrote two amici briefs for the court. The chief judge of the court gave each clinic student an Air Force medallion coin to recognize their hard work and dedication to the appeal.